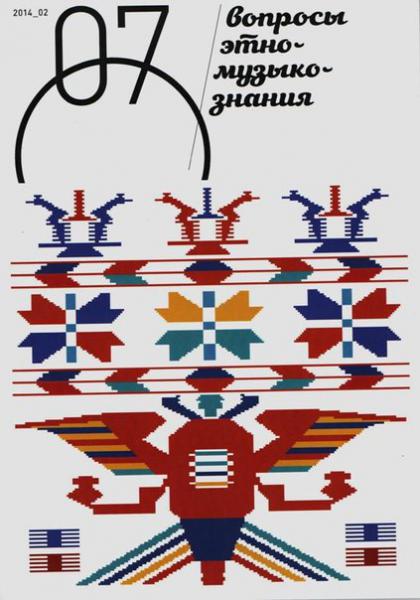 Tanok and karagod in the Kursk region: text component and definition of genres

Objects of this work is a bright and original round dance tradition of Kursk-Belgorod borderland (upstream river Psyol). It is being implemented in two genres — Tanok and Karagod (folk terms). The author’s goal — to establish principles on which these genres delineated. To do this, he explores their functional characteristics, the poetics of song texts, especially musical structure, the ratio of choreographic, musical and poetic song system components.

The paper is devoted to the roundelay-gaming song practices of belarusian-russian borderland. The main attention is paid to the ethnographic context of round dance tradition, their seasonal confinement. The author traces the territorial dynamics of functioning of winter, spring and off-season round dances, highlights the regions studied in three geographical zones.

«Funeral arrow» is one of the signs of the annual ritual calendar cycle in the eastern Polessye. In his song design occupies a central place politextual formulaic tunes with bright musical stylistics features inherent Ruthenian ritual genre. Mapping rites and songs identified epicenter distribution in the Bryansk-Gomel-Chernigov borderlands, as well as the periphery — both near and far, including outside the former Soviet Union.

This paper is the example of monographic study one of best known Ukrainian koliadka “macrotypes” (with the syllabic rhythmic structure 5+5+3 in two-line strophic version).Modern base of 620 archival and published samples of this type of song, allowing to set the main outlines and the internal organization of its area (attached map). The article commented on the observed regularities, presents a hypothesis about the possible migration routes form.

The author made ​​a map of the distribution calendar ritual songs in Smolensk region and beyond. As a result, a wide range of relationships in the region with a variety of ethnic and cultural traditions of the Eastern Slavs, both Belarusian and Russian. The heterogeneous nature of the calendar-song cycle is the product of complex historical and cultural processes that have taken place in the area.

To analyze the semantics of ritual folk tunes author offers come from the expressive value of intonation (intoning) and semantic potential of the genre. In intonation semantic field highlighted two layers: the «natural» due to the psycho-physiological factors, and «cultural» having a conventional character. The stated problem is examined on the material of wedding songs and laments of the Middle Urals in the interdisciplinary field of ethnomusicology, general psychology, psychology of music perception, ethnolinguistics.

This paper analyzes the melodic organization of Tuvan epic «Hunan Kara» in connection with its metro-rhythmic. In the musical and poetic structure tales have been allocated level of musical-rhythmic units. They form a stable succession of repetitive tirade tirade motivic unity — intonation patterns. Analysis allows us to draw parallels with geographically close ethnic traditions.

Folklore expeditions to the area of the river Ust’ya of 1977-1978 years. The life experience of previous generations

The handwritten archives of folklore expeditions of Leningrad (St. Petersburg ) Conservatory in Ust’yansky District of the Arkhangelsk region served as the material for the article. The mastery of folk singers, their  vivid characters, the ability to survive in difficult life circumstances have produced unforgetable impressions on the young participants of expeditions .