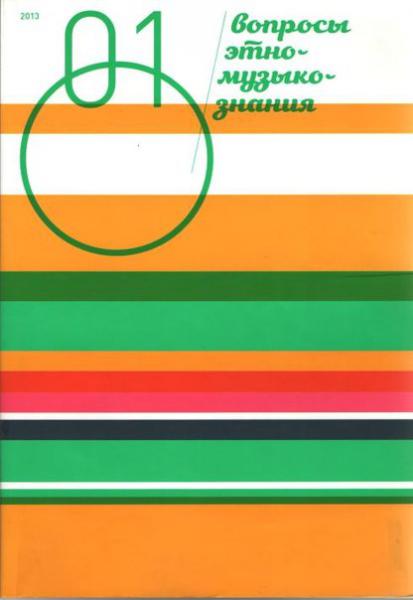 The paper concerns many-voiced forms of the vocal tradition in the Poltava region — its geographic, generic and performing aspects. Particular emphasis is put on the two registers polyphony — a many-voiced form with a «thin» voice. The article describes how particularities of many-voiced forms are reflecting in the lexis of native bearers.

About two registers heterophony in the Russian North: on the materials of Mezen expeditions

The paper is devoted to features of two registers heterophony on musical folk materials of basin of the Mezen river — one of the main areas of its distribution in the Russian North. The author examines the preservation and historical dynamics of this phenomenon, its geography, age, gender and genre differentiation. Mesen singing culture is presented in the context of other traditions of Russian North, and above all Pinega because these areas are close geographically and are the most significant amount of published and archival samples two registers singing.

Wedding songs of traditional culture in the basin of the Oskol river (the Belgorod region) are a central genre group. Wedding songs pitch has traditionally significant for performance. Most wedding tunes are implemented in specific forms of many-voiced texture. Some of them is unique to the Russian folk music culture.

Songs of the village Ptchelinovka

The author acquaints the readers with the art of folk singers from Ptchelinovka — the village of the Voronezh region. Lyric (broad) song occupies the central place in their repertoire, which is characterized by complex, colorful many-voiced texture. The author publishes score-notation two of lyrical songs of Ptchelinovka.

On the analytical method of notation

Problematics of this paper is analytical method of notation, which was introduced to the academic community by the outstanding Russian ethnomusicologist Evgeny Hippius. As a result of the typological approach to music and folkloric events, aimed, in particular, to identify patterns of national musical form and a national musical style, analytical notation has become an alternative of «subjective-empirical method» which had been adopted in the European comparative musicology in the mid-twentieth century. The author proposes a distinction between two main types of typological transcription — the subjective and objective, describing at this point the history of the development of analytical notation in east Slavic structural ethnomusicology.

The paper presents views on the principles of analytical musical transcription of Evgeny Hippius, the founder of structural-typological direction in the Russian etnomusicology. The author describes the activities of the scientist in the field of practical transcription, gives his unpublished theoretical statements concerning important aspects of analytical notation of folk music.

Oscar Kolberg and his folk-music collection

The paper describes O. Kolberg’s work and heritage in ethnomusicology. The aim of the paper is to represent the original personality and academic achievements of the outstanding polish scientist of XIX century. The author considers the points of origins and structure of the ethnographic collection «People» («Lud»), revealing the Kolberg’s conception of folklore notation methods.

Temple theatre of India: from the past to the present

The paper is devoted to temple art of medieval and modern India. The basic dancing, theatrical and religious dramas of different states are considered, the etymology of their names is tracked, regional styles and specificity of their performance are revealed.