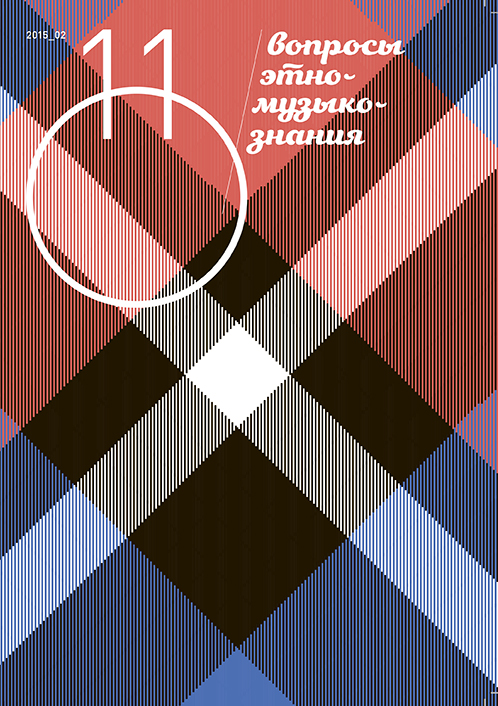 In the age of social upheavals and cataclysms appear new human and professional facets of personalities. The author considers two unique works Evgeny Hippius — «Intonational elements of Russian chastushka» (1936) and «Russian folk songs: Songbook» (1943) — from a socio-historical context of the era of the Great Terror and World War II.

The author refers to the legendary complex expedition Zubov Institute in the Russian North, the participants were musicologists Evgeny Hippius and Zinaida Evald. The paper highlights some little-known details of the organization of these visits, field practices and methods of working with materials after the expedition.

One type of epic chants (bylina) of Siberia

By thinking the author, this paper is a replica of a recently published paper Evgeny Hippius «Epic melodies Ryabinins family» (1947). The material of its steel samples epics recorded in Eastern Siberia in the Russian-speaking Métis Chukotka (Anadyr River). It involves two aspects — the kind of musical strophic organization epics and their rhythmic form.

The paper is devoted to problems of the local traditions in the light of the study laments creativity of artists. The author on the basis of certain indicators identifies three types of traditional mourners: master, repeater and ordinary participant rituals. The characteristic of the repertoire of singers of different groups and individualized complexes genre-style funds in the lamentations of the Oka-Klyazma interfluve.

The basis of the paper was previously unpublished field materials of the expeditions of the St. Petersburg Conservatory in Lyubitino district of the Novgorod region. Examines tunes solo laments occurring in various ritual contexts and situations. Among the recorded samples about 30% of records associated with uncaesured tunes. The author attempts to correlate features of the structure of laments with their function and determine the status uncaesured tunes in the local tradition.

Novgorod region, folk tradition of lamentations, the rhythmic structure of the melodies

The funeral lamentations of the south-west Pomorye

The paper is devoted to the general description of the funeral lamentations in the White Sea region, which are considered in the context of the funeral ritual. The author reveals some features of poetic and musical language laments, localized in the southwestern Pomorye, and numerous typological parallels with the lamentations of other regional traditions

The genre specificity of wedding laments in Viena Karelia

The paper presents the author’s observations on music features wedding laments Viena Karelia, both solo and in a joint performance. Laments Viena Karelia are discussed in relation to the lamentations of South Karelia, analyzes their melodic and rhythmic organization and musical-poetic composition.

Lithuanian flute skudučiai: the way of the development of the tradition

Skudučiai all the time took a significant place in Lithuania‘s ethnical culture. Ensemble performance is exclusively characteristic for this instrument. The paper analyzes the skudučiai playing culture changes in the XX–XXI centuries. The objective of the research is to analyze the meaning of the changes to the skudučiai music alteration and popularity in Lithuania‘s culture context from 1920 untill these days, ascertain problems and perspectives of these changes.

Estonian folk zither “kannel” is one of the most far-spread musical instruments for Estonians. The Republic has a lot of masters for the production of Kannel who are looking for various ways to ensure that the instrument meets the requirements of today. Despite the fact that the form and operation of the zither was formed in the late XIX century, the instrument is in constant development and is open to various influences. The author introduces the inventions of the Estonian musical master Väino Maala.