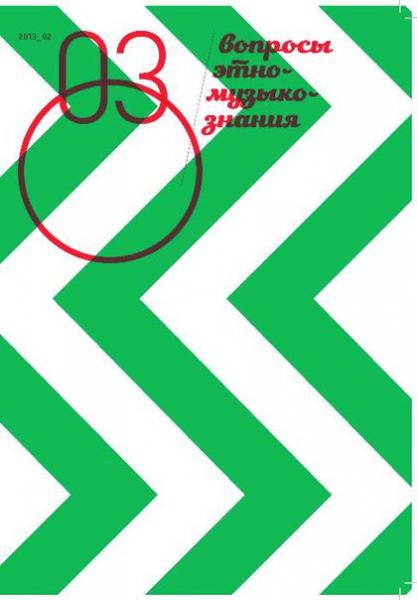 Musical tradition of Zakamye belongs to the cultures of the late formation. The secondary character of a tradition effect on the song image of folklore, rhythmical and modal-melodic organization. The paper presents the results of modal-melodic analysis wedding farewell songs. The author offers a special method of analysis and typology of investigated tunes, which takes into account their cultural specificities.

Men’s song in the women’s execution: the transformation of genre and style

The author refers to the gender dimension of folk culture, fully defining the traditional way of life and social status. One of its manifestations — the existence of male and female vocal traditions. In the XX century due to a number of historical and social reasons marked the transition men’s songs in the repertoire of women’s ensembles. The author traces the changes melodies that accompany this transition.

Lyrical songs of the Novgorod region: the collection and problem of studying

The article is devoted to one of the traditions of lyrical songs of Russian North-West. The collection of the Novgorod lyrical songs recorded the status of the genre in different historical periods. The author characterizes the main publications and existing archival collections, which are reflected by genre and style variety of forms of lyrical songs of the studied region.

The name of the Russian folklorist, teacher, composer, musical and public figure Alexander Rubets associated two anniversaries: the year 2012 was marked by the first of the 175th anniversary of his birth, and in the year 2013 marks the 100th anniversary of his death. He distinguished himself as an outstanding collector of folklore, his works were enriched considerably factual basis of Russian science. This paper is one of the first experiences of achievement and performance evaluation of the scientific heritage of this outstanding creative personality in the history of ethnomusicology.

On the footsteps of Alexander I. Rubets

A. I. Rubets in the middle of the XIX century began collect and publish of folk songs in the Russian-Belarusian-Ukrainian border zone. Following expeditions on its traces in the XX century opened unique ceremonial layers of national creativity. The subject of the paper is spring song of the same type, recorded by expeditions of the Moscow Conservatory on the Starodub region.

The paper is devoted to the Western Bryansk region’s spring round dances and their accompanying songs. It presents the features of the round dances in the different local traditions. Widespread in this region, the round dances-processions, timed for the spring-summer border dates, are considered as a specific form of the ritual seeing-off.