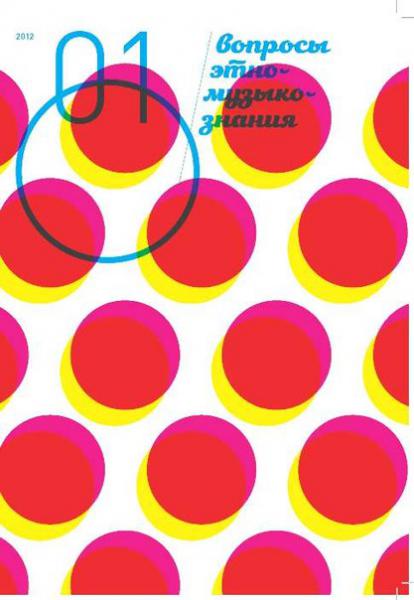 From glossolaly to songs: child’s sound behaviour in ontogenesis

In this paper the main forms of a child’s sound behaviour in ontogenesis is under consideration. The author is inerested in the process of the child’s gradual coming into being through his spontaneous intonating a certain number of regularities which are characteristic of oral music tradition: timbre articulation base, intonation collection, and music grammars (rhythmical, sound pitch, syntactical), melodic formulation.

Сhildren’s field laments of the Pskov region: to the problem of introduction in educational process end in performance practice

The paper is devoted to musical and style features of children’s field laments of the Pskov area. The author brings up a question of specifics of fixing of similar forms in forwarding practice, mentions a problem of introduction of field lamentable forms in repertoire of modern children’s collectives, and also gives some results of experimental work in this direction.

«My hands comb the yarn, my feet swing the cradle…»: maternal folklore in traditional culture of Kuban region

The maternal folklore of Kuban Slavs like lullabies, merry and foster songs is considered in this article. A child learns quite a lot of facts about outward things during first year of life, and child subculture plays a lead role in that process. A maternal folklore helps a child to get socialized, to make an opinion about familiar and unfamiliar objects, and poetic lyrics and tunes also play a certain role in it. The perception of lullabies in the early childhood prepares a person to become familiarized with complex set of traditional culture.

Russian lullabies to the mobile structure

The article is devoted to a specific group of Russian lullabies, the main distinguishing feature is the presence of mobile principles of composition and rhythmic structure. The article deals with forms of mobility in the lullaby of the various regional traditions. The author raises questions of the nature of the principle of mobility as musical folklore of thinking, his condition functionally meaningful role melody and solo nature of the utterance.

The attempt is undertaken herein to start implementation of the information, declared in the author’s previous article, on local arealogic developments of Ukrainian ritual melodies in the common “macrofield”. The Midsummer songs, timed to the “Kupalo”- “Petrivka” holidays, examined in Ukrainian — Byelorussian area, were chosen for the purpose. The additional aspect of the research is to trace the typical Midsummer melodic forms realizations in other genres. The chosen areas are visualized in special maps.

Originality wedding tradition of Zakamye (Kama region) caused by late Russian colonization of the territory. The current musical culture here is one of the traditions of the secondary formation. The author explores wedding parting songs of the Kama region. The paper proposes a special method of analysis of pitch organization melodies of the genre.

Vladimir Mazepus and its activities in ethnomusicology: main trends and research results

In 2012, 65 years have passed since the birth and 5 years after the death of Vladimir Mazepus — outstanding Russian ethnomusicologist, Professor of the Novosibirsk Conservatory. He is the author of a number of new methods for systematic study of musical cultures of Siberia and the Far East. The article presents the main trends and the results of its research activities.